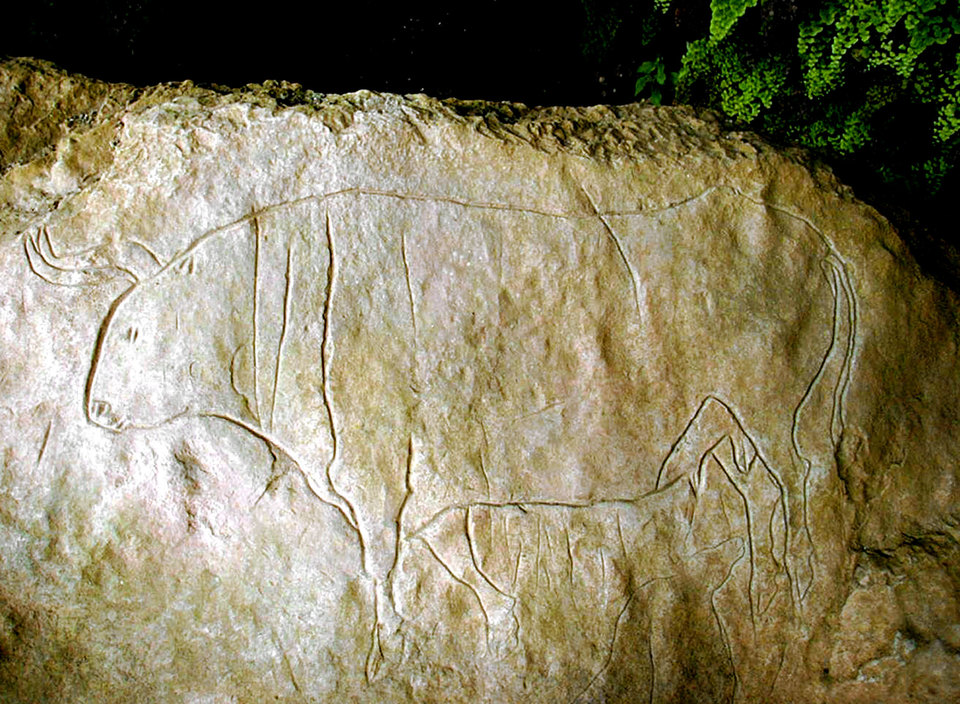 The engravings on this boulder are three:

BOVID 1
The most significant is a large image of uro (Bos primigenius) (length 120 cm), made with a deep incision that allows the figure to emerge with great evidence on the surface of the rock due to the effect of chiaroscuro decided tract. Paolo Graziosi, which must be the first report in 1961, called this figurative produced "the most majestic and joyous expression" of art in the Mediterranean. His stylistic characteristics are within the canons of art Paleolithic Franco-Cantabrian: the incision vigorous tract, the proportions of the figure, the presence of the details of the muzzle, of sex, of the feet, the two horns drawn in full. We have no precise comparisons with French engravings. Some linear marks in the neck region and a line that crosses the topline may perhaps indicate virtual wounds inflicted to the image of the prey according to the practice of "hunting magic" which is widely distributed in the European artistic symbolism.

BOVID 2
A second ox, of far less size, was engraved with thin line between the aurochs legs. Appears to run rather cursory, not well proportioned, with only three legs just started, on the face are indicated with light strokes mouth and nostril.

BOVID 3
Lower than the two above mentioned figures of bovids, on the same boulder and after a group of linear signs, was engraved the profile of a small head of bovid, with one horn, incomplete, and with some parallel lines on the neck, perhaps to indicate the folds. It is a still more modest figure of that of the second bovid.

Remarks
The chronology of the three incisions is dubious and can only be defined by the style. It can be assumed that they date back to the Final Epigravettian in which the Franco-Cantabrian stylistic influence is still attested in the movable art in the South of Italy no later than 14-13,000 years ago.

It was the end of the last glacial period, between 14,000 and 10,000 years ago, that brought the Palaeolithic to a close. Italy, like other European areas, witnessed the formation of well-defined regional areas, with elements of heterogeneity within the lithic production. Behavioural practices that weren't by nature utilitarian – that is to say those associated with funerary practices and artistic experience – occurred cross-regionally.

The Franco-Cantabrian style began to fade out from artistic productions. No longer adopted in the South, it left traces in the Centre and the North of Italy, where echoes of the transalpine tradition persisted, filtered through the expanding Mediterranean style. In the final two millennia, this language assumed a more synthetic and abstract character, with especially geometric and linear graphic productions.