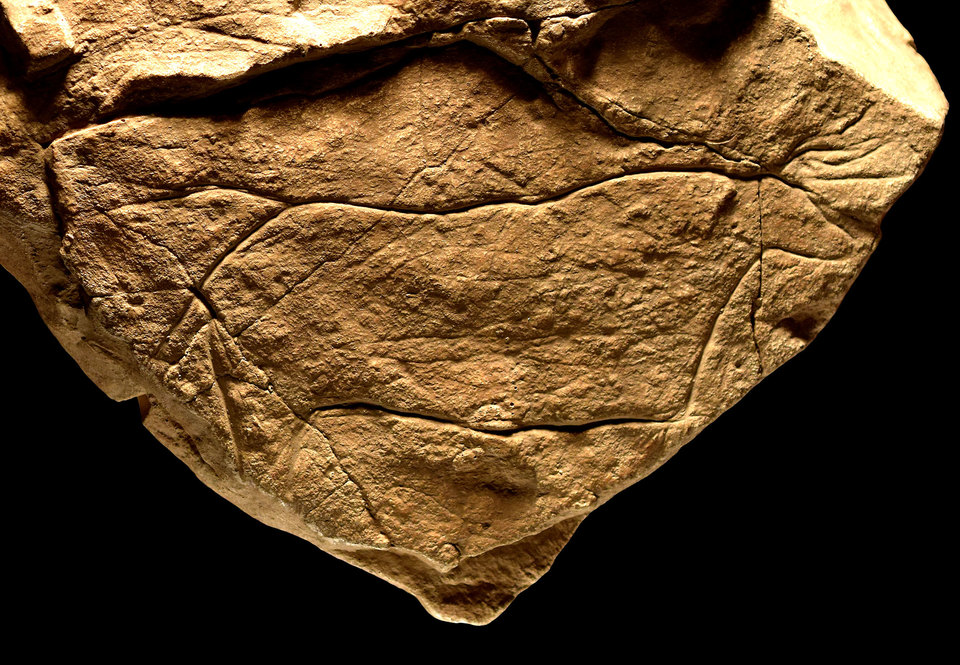 The engraved limestone block has a figure of an upright bovid, in profile, depicted with forceful markings characterized by naturalism, schematic but not of poor quality, simple but not rigid. It is an important example of the “Mediterranean style.”
The engraving does not seem directly related to the other faint markings inside and outside of the profile. On the belly above the foreleg the suggestion of a zoomorphic profile is very questionable. The style is more rigid compared to that of the engravings, which may indicate a more recent chronology with respect to them, within the final Epigravettian.
(figure lenght cm 22)

The development of progressive regionalisation appeared in Europe as a result of the Second Pleniglacial. The central-eastern regions, up to the Atlantic and the Iberian Peninsula, maintained their cultural physiognomy with aspects which, in that part of Europe, have been termed the Solutrean, the Magdalenian and the Azilian (from 20,000 to 10,000 years ago).
Italy distanced itselfculturally from this sphere, the peninsula take part in the wide province of the Epigravettian which encompassed the Mediterranean area of the continent from Provence up to Balkans and the Black Sea.
In the 10,000 years that followed the end of the Upper Palaeolithic and the Pleistocene, the process of regionalisation became a generalised phenomenon. This also occurred in Italy, where a progressive and rapid detachment from French influence is documented. In the artistic field, this phenomenon brought about the birth of original styles and languages.